Because the GNA is an isolated forest fragment in a 'sea' of development, the preserve is vulnerable to a wide range of threats: e.g., habitat fragmentation, overgrazing by deer, species loss from invasive plants, non-native insects and diseases, etc.  Hence, GNA staff, along with WCU faculty and students are engaged in a variety of activities to help protect this irreplaceable resource.

Forest fragmentation, the killing-off of large predators, and conflicts over hunting have resulted in the proliferation of white-tailed deer to unprecedented population densities.  It is estimated that the deer population at the GNA is on the order of 80 individuals (see: GNA Deer Management Plan ).  Hence, the population density of deer is ~25-40 times the lands' 'carrying capacity' (i.e., the deer population that could be maintained without tree regeneration being significantly impacted).

At the GNA, deer density has been so high for so long that a 'browse line' is starkly evident throughout areas with mature forest and most species of tree seedlings are nearly absent from the forest floor. In particular, native oak seedlings, which are highly preferred food for deer, are now rarely found. Although there is regeneration of a few species that are less preferred by deer (e.g., American beech, white ash, and various hickories), the number of seedlings hardly seems adequate to replace the current canopy species in the future.

Beginning in 2008, GNA Staff, WCU Faculty, and countless student volunteers have planted a variety of trees in the GNA.

(To be continued — Check back soon) 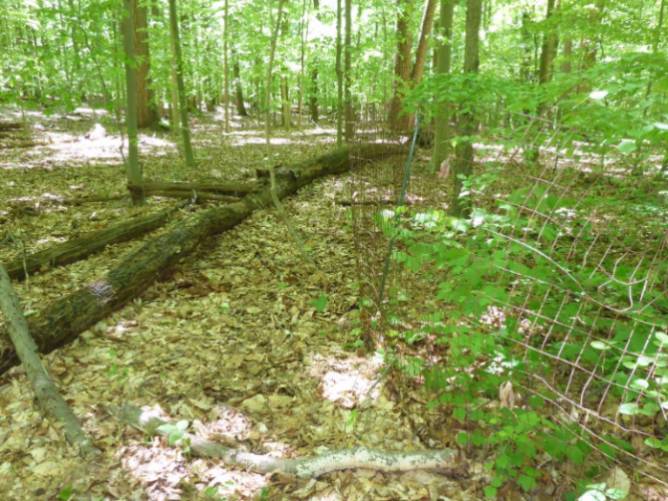 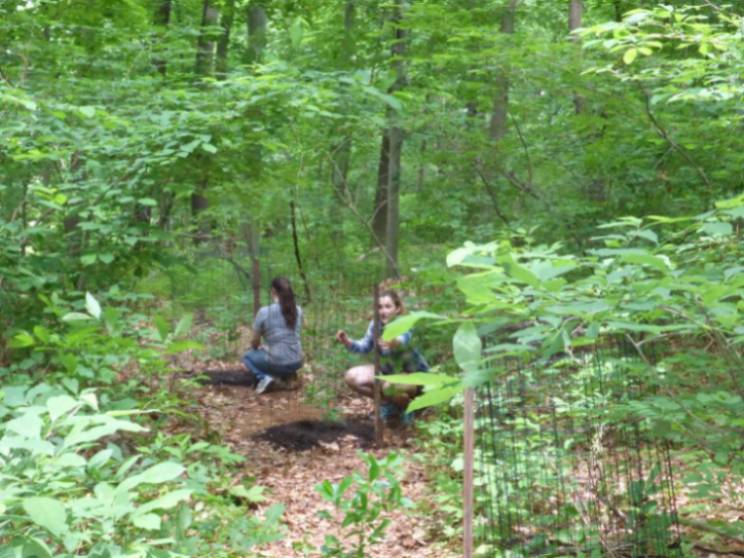 Overgrazing at the GNA has also had significant impacts on herbaceous species.  Many of the herbaceous species that were formerly common at the GNA are now uncommon and their occurrences are scattered.  Additionally, a good portion of the regions' spring ephemeral species are ant-dispersed, requiring us to compete with the ants (who are much more proficient at seed collecting).

To help address these issues, we've begun work on a native plant nursery at the GNA. Our intention is that the nursery will help us to increase seed stocks for species that we plan to incorporate in restoration efforts.  In the fall of 2016, 8' high fencing was installed around a 50' x 35' area in a forested portion of the GNA.  In the spring of 2017, we began installing raised beds and began transplanting a small number of native species.

Although we are doing some small-scale transplanting in the nursery's first year, we intend to primarily grow species from seed.  Having 'centralized' populations of species will facilitate seed collection.  In particular, having easy access to populations of ant-dispersed species will greatly aid us in accumulating stocks of these difficult-to-collect seeds. 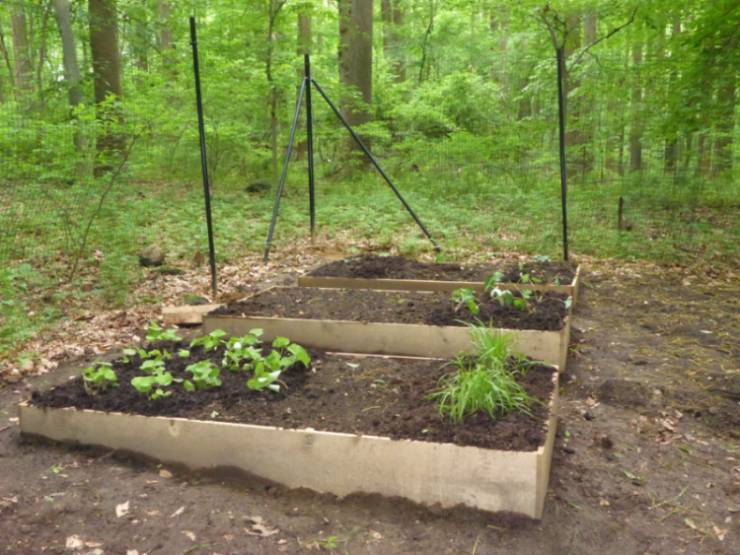 The first three beds at the Native Plant Nursery.

In 2014, the Gordon Natural Area was designated as a 'Wild Plant Sanctuary' by the Pennsylvania Department of Conservation and Natural Resources.  You can read about the GNA's inclusion in that program here.

Since the initiation of monitoring in the mid-1980's, 431 native plant species have been noted in the GNA.  Fifteen of these species are on the Pennsylvania Natural Heritage Program's (PNHP)  list of plant species of conservation concern.

To help manage and protect these species, we have begun geo-referencing and mapping all occurrences that we encounter.  Additionally, we have begun installing exclosures around species that are sensitive to browsing.

The image to the upper right shows an exclosure that was installed to protect a small population of the state-imperiled Nodding Trillium (Trillium cernuum).  We installed the exclosure within a few days of encountering the population.  Nevertheless, in the interim, two of the four individuals of Trillium at that site were browsed to the ground!

The image on the lower right shows the Crippled Cranefly Orchid (Tipularia discolor).  This State-listed species is known from a couple of locations in the GNA.  In the winter of 2016, we placed an exclosure around this small sub-population (just two individuals).  In the summer of 2017, the orchid was observed in flower for the first time. 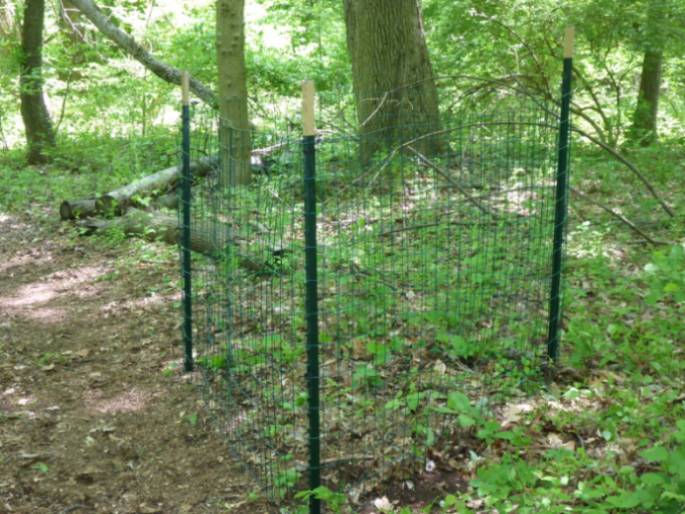 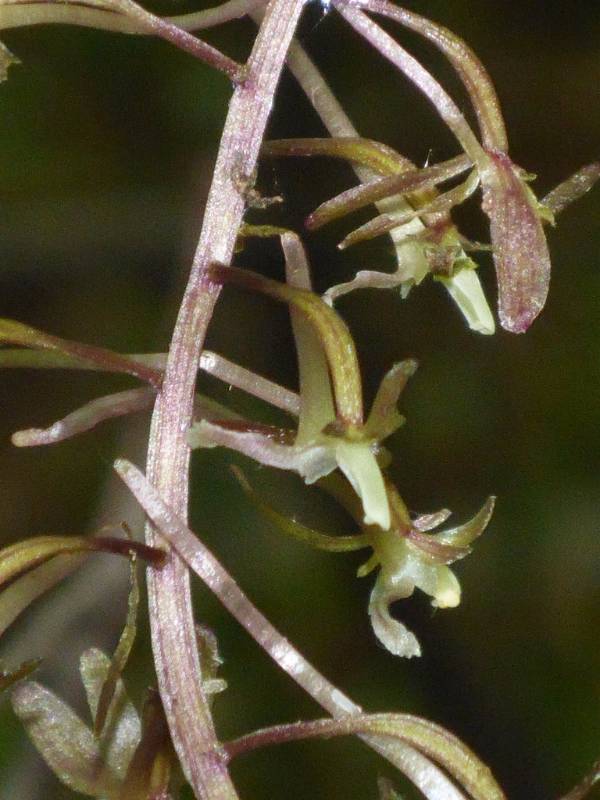 The Emerald Ash Borer (Agrilus planipennis) is an Asian insect that infects species of Ash (Fraxinus spp.). The EAB was first noted in the United States in 2002. Since that time, this species has become established throughout the eastern US, and hundreds of millions of ash trees have perished due to EAB infestation. To date, EAB has not been recorded for Chester County, although it has been found in four of the five adjoining counties.

If EAB does become established in the area, the prediction is dire, both for the GNA and for the remainder of the WCU campus. Infected trees generally die within four years following the initiation of infection. In a campus-wide census, 1,443 ash trees were noted in the GNA, with an additional 609 observed elsewhere on campus. Thus, an Emerald Ash Borer infestation would likely result in the death of significant numbers of trees on campus, resulting in the GNA and other areas being radically changed.

Hence, early detection of EAB has been accorded high priority in the GNA work plan. Kendra McMillin (a long-time GNA student intern and, subsequently, the Assistant Stewardship Manager at the GNA), instituted an EAB monitoring program at the GNA and on the WCU campus. Monitoring began in 2011 and is ongoing

Additionally, Kendra initiated a partnership with Pennsylvania's Department of Conservation and Natural Resources (DCNR).  From this partnership, EAB biological control efforts were begun at the GNA in 2016, in an effort to help evaluate management strategies for EAB in Pennsylvania.

Biocontrol efforts in the Summer of 2016 consisted of releases of two insect species (Tetrastichus planipennisi and Oobius agrili) that are known to parasitize EAB in its native range.  Twelve American Ash trees were selected to receive the two insect species.  The insects were released weekly for eight weeks.

Biocontrol efforts in the Summer of 2017 consist of four rounds of releases of Tetrastichus planipennisi and Oobius agrili, and a single release of Spathius agrili (another EAB parasitoid).  Additional parastitoid releases will be undertaken in the Summer of 2018. The releases in 2017 and 2018 will take place every three weeks, or so.  Following the 2018 releases, GNA Staff will assist with the harvest and examination of the 'release' trees. 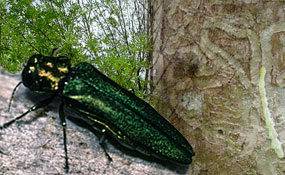 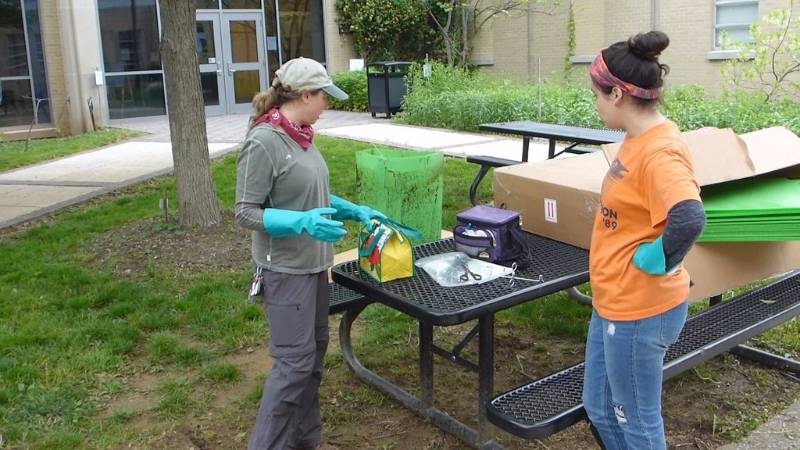 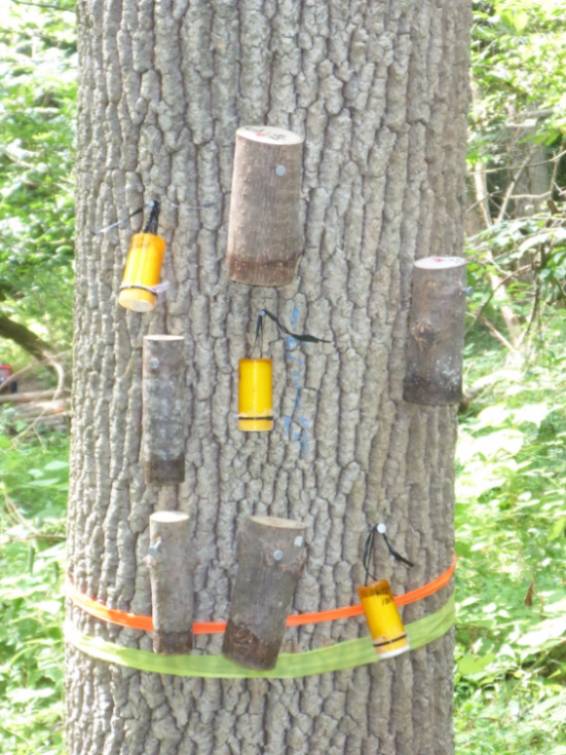 The GNA contains approximately three miles of trails.  Of this, about half is composed of ‘unofficial trails’ (trails that are neither marked, nor maintained).  Although not officially ‘sanctioned’, some of these trails get extremely high use, and are showing signs of wear.  Additionally, some trails—in particular, those that parallel Plum Run, or those which run directly upslope—are poorly situated with regard to erosion potential.

We have begun to address these issues on some trails by either closing the trails to foot traffic (hopefully), or by rebuilding the trail surfaces and adding erosion control structures to the more heavily-eroded sections of trails.

To date, trail closure has consisted of planting trees along the beginning and ending section of trails.  The trees are protected with fairly large (i.e., ca. 3') diameter wire mesh exclosures in order to create an impediment to easy walking  (see photo).  Usage on the two trails on which trees were planted appears to be somewhat reduced.  However, one trail, which runs alongside Plum Run, still receives a good deal of use.

In order to help inform visitors why we were closing the trails, we provided an explanation in the GNA Kiosk and installed a sign indicating why the trail was closed.  There was some intial vandalism of some of the trees, and the sign was only in place for a few weeks before it was stolen, but people have generally been respectful of the changes to the trails.

Recently (August 2017), we purchased a 'LogRite Buck Arch' (see photo) to assist in moving logs and boulders into areas that are receiving erosion control structures.  Logs are installed perpendicular to the flow of water in order to create a sediment dam.  A series of logs are placed along the eroded section of the trail (or former trail) and, over time, sediment 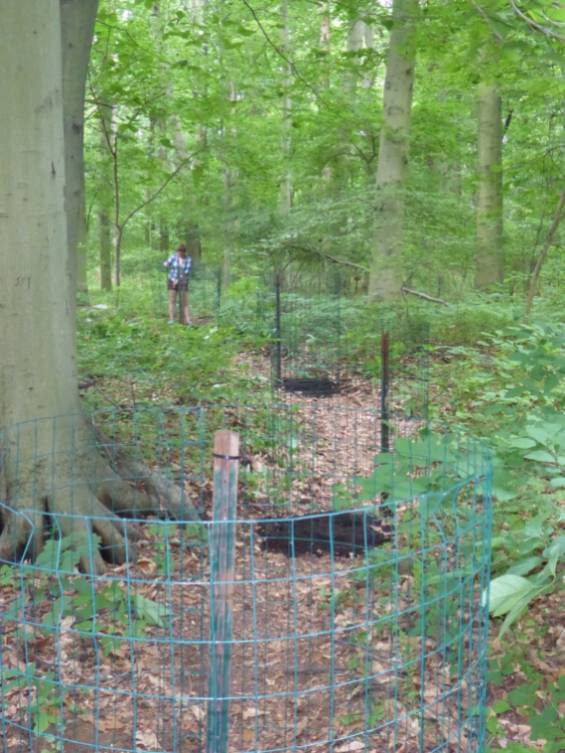 Tree planting along one of the decomissioned trails. 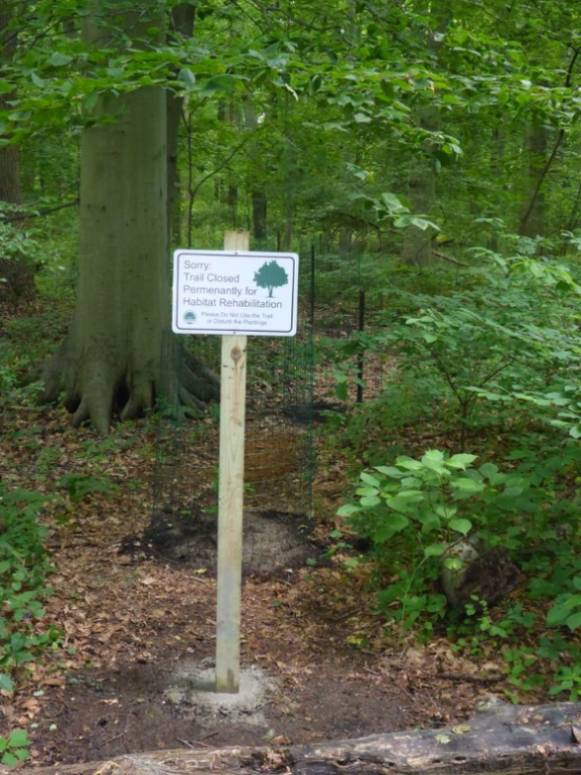 The 'Trail Closed' sign that was placed at the beginning of this same trail. 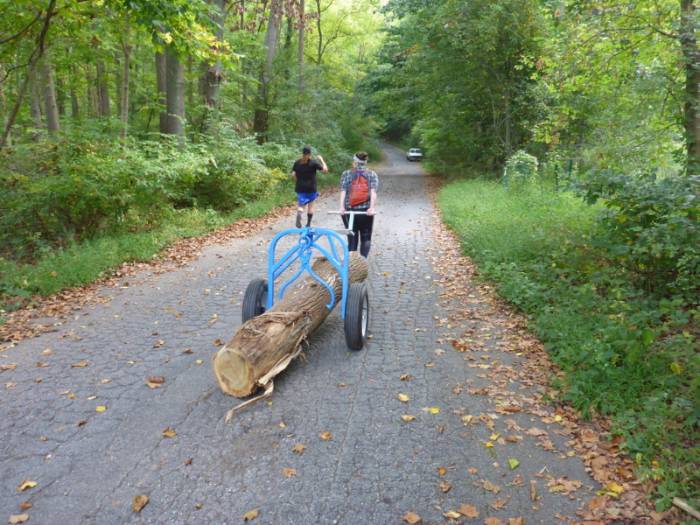 As noted, the Gordon Natural Area represents an isolated forest fragment situated within a heavily developed area.  Not surprisingly, a significant portion of the flora is represented by non-native species.

Of the 609 species of vascular plants noted at the GNA, 178 species (~29% of the flora) are non-native.  Forty-five (~25%) of these 178 species are listed as 'invasive plants' on the the Pennsylvania Department of Conservation and Natural Resources Invasive Plants List. Nine additional species are on the DCNR's invasive plants 'watch list.' The 'invasive status' of these 53 species is indicated on the Flora page.

In contrast to these agressively invasive plants, many of the introduced species at the GNA are relatively benign (i.e., they don't tend to spread agressively).  Additionally, a number of the introduced species haven't been seen at the GNA for many years.  For example, European Privet (Ligustrum vulgare), Scotch Pine (Pinus sylvestris), and Standish's Honeysuckle (Lonicera standishii), were all last observed in the GNA nearly forty years ago (all three were last noted in 1978), and six other introduced species were last observed in 1984.  And, in at least a couple of cases, only a single individual of a particular introduced species is known for the GNA (e.g., the Goldenrain Tree, Koelreuteria paniculata, and the Sycamore Maple, Acer pseudoplatanus).

Desipite many of the non-native species not being obvious threats, the GNA is home to numerous agressively invasive plants, as is generally the case with forest fragments in urban areas.

Some of the more abundant and/or more problematic species at the GNA are:

To date, the greatest portion of invasive species control efforts at the GNA have been directed towards controlling Garlic Mustard (Alliaria petiolata).  Garlic Mustard was the focus of annual control efforts at the GNA from ca. 2009-2015 (see below). These activities incorporated a substantial amount of student labor. Unfortunately,  it is unclear whether or not these efforts have had much success towards reducing this species' abundance.

Other species have been target for 'early detection' control measures.  Among these are Narrowleaf bittercress (Impatiens capensis) and Burningbush (Euonymus alatus). 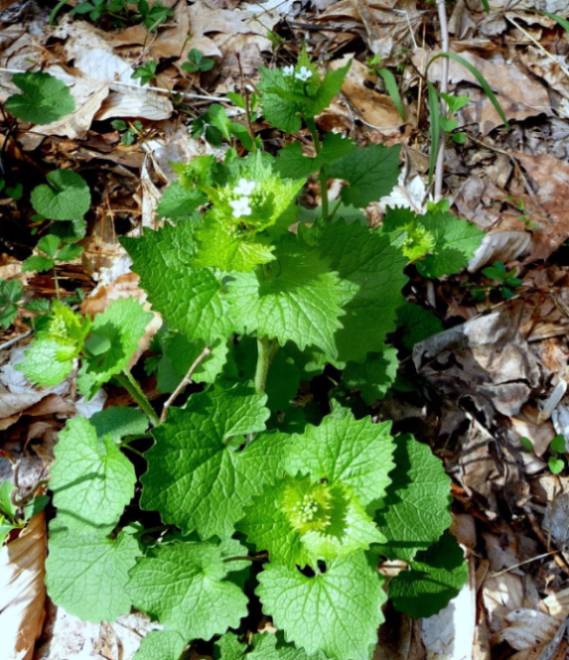 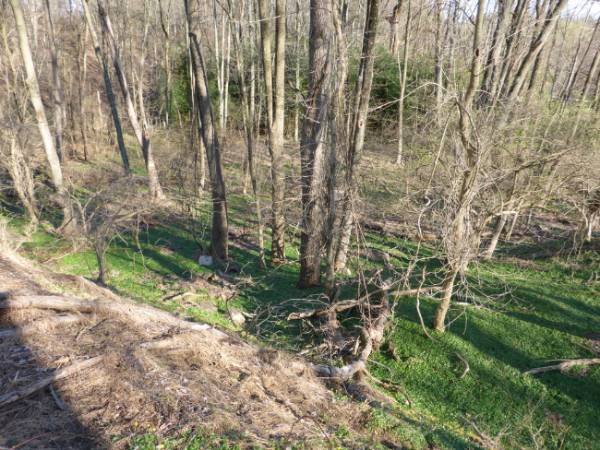 Japanese Barberry (Berberis thunbergii) dominating an area of seasonally-inundated forest at the GNA. 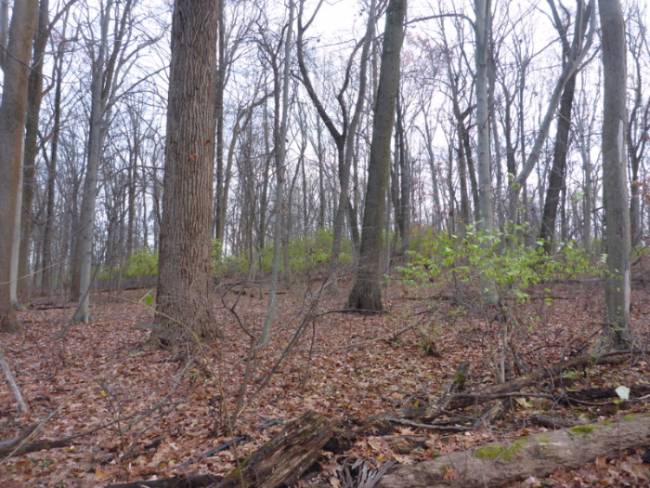 Amur Honeysuckle (Lonicera maackii) dominating the forest floor.  This species retains its leaves well after most other species have dropped all their leaves (the photo was taken in early December, 2016).

Group representatives can email us and arrange to pick up the tools from the WCU campus.  Borrowers are responsible for returning all tools at an agreed-upon time and for ensuring that the tools are returned in as good a condition as when they were borrowed.

You can also find other Tree Tenders Tool Libraries on the Pennsylvania Horticultural Society's website at: https://phsonline.org/programs/tree-tenders/tree-tenders-maps (scroll to the bottom of the page to see the Tool Library Map). 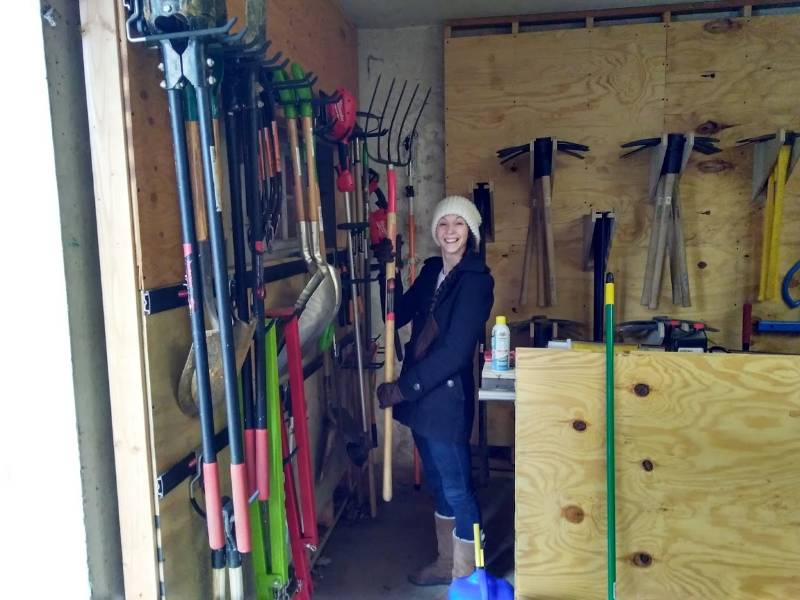